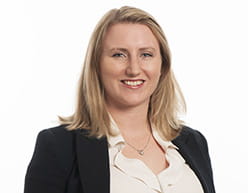 Stephanie is a fourth seat trainee based in our Exeter office, she joined Trowers & Hamlins in March 2018.

Stephanie is currently working in both the Employment and the Corporate and Commercial departments. For employment she is involved in advising employers with regard to matters such as redundancies or grievance and disciplinary matters; assisting with tribunal claims for both employees and employers; and drafting employee handbooks. For corporate and commercial she is assisting with restructurings such as hive-ups and share transfers. She is gaining experience in drafting complex agreements such as partnership agreements and articles of association.

Stephanie spent her third seat trainee in Commercial Property. In this department she undertook a variety of work including negotiating leasehold management agreements on behalf of both landlords and tenants, and facilitating the acquisition and disposal of properties. Such work has included working for the retail, investment and education sectors.

Stephanie's second seat was in our Dispute Resolution Commercial Litigation department, where she gained experience across a range of contentious areas. She has assisted clients ranging from individuals, to large insurance companies and airlines. She has been involved with various cases including: professional negligence, breach of contract, contentious probate, boundary disputes, rights of access disputes and intellectual property infringement.

Stephanie's first seat was in Housing and Regeneration. She assisted on a wide range of projects including assisting large developers in the early stages of investigating and acquiring sites for development, negotiating infrastructure agreements, and facilitating staircasing and right to buy for housing associations. She also helped to facilitate the acquisition and charging of large portfolios of property and conduct due diligence on a large scale.

The Coronavirus Act 2020 - what does it mean for your business?