Public funding of broadband networks - how much should now be returned to the public purse?

Since 2012 Central and Local Government has been investing public money in private sector deployment of broadband infrastructure where there is clear market failure. Market failure is the key trigger that enables public funds to be invested without breaching State aid rules.

Central Government via Building Digital UK (BDUK), and European funds have awarded approximately £1.7bn of grant funding to network providers to deliver the various phases  of the Superfast Broadband programme. The Local Government contribution to this was close to £1bn.

What type of funding has been provided?

The public funding is provided as a ‘gap funded’ contribution, meaning that public money was only provided to the extent that it bridged the gap between the network providers investment business case (i.e. what it would normally invest in) and the amount actually required to deliver the new superfast broadband. So, the addition of grant funding meant that commercially unviable broadband became deliverable, thereby fixing the original market failure.

Local bodies have a contractual relationship with the network providers for both the length of time it takes to build the network, but also for an operational period.  The operational period is typically between 7 and 10 years and enables the local body to monitor that funds remain State aid compliant and continue to be applied to the network.

Funding can be returned and reinvested

State aid  requires that the level of gap funding provided is in all cases appropriate, meaning that the minimum amount of aid is provided to fix the market failure. The contracts used to manage the Superfast gap funding investment for the  most part follow a standard BDUK template and, whilst there are some variances and some bespoke contracts, all have protections built in to avoid network providers receiving, or retaining, too much gap funding.

To ensure that the appropriate level of gap funding is provided and that State aid is complied with, the contractual protections focus on two areas:

By auditing build for efficiencies and spend compliance with the contract and quantifying excess profits, the minimum required amount of public funding can be re-recalculated  and any excess State funds should be returned to the local body for re-investment in further  deployment, and failing this, back to central government. 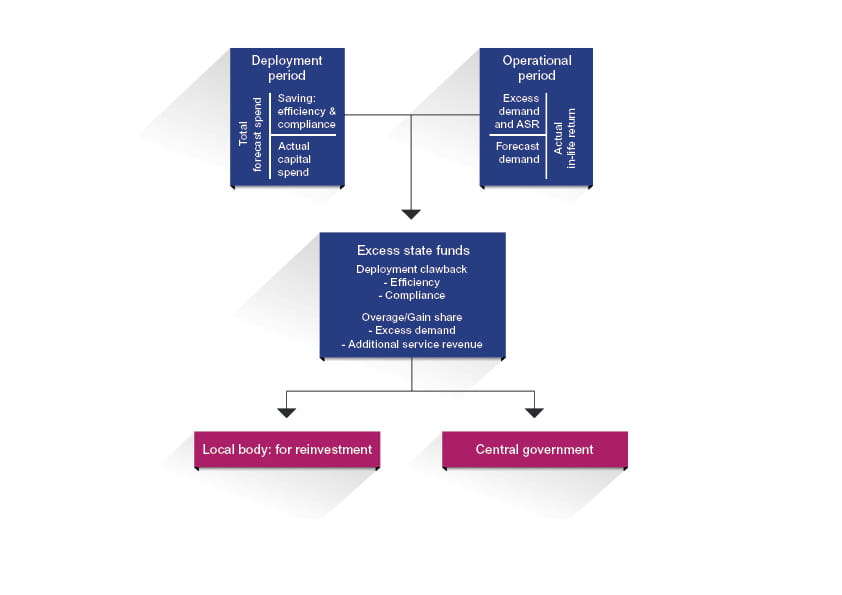 Has enough funding been returned to the State?

The answer to this is that it is unlikely. The degree to which the mechanisms in the various forms of contract are fully mined for value by local bodies varies enormously and often, where experienced teams are not present, relies on central government intervention. Due to the resourcing constraints for local bodies and central government, who now understandably are focusing on future developments rather than past contracts, it is probable that network providers are being let off the hook and the full restoration of the public purse is not achieved.

The optimal time to deal with build efficiencies or contractual compliance issues, is at the point that build reaches completion, although it is also reasonable to retrospectively audit this during the operational phase of any deployment.  It is also necessary to carry out a review of consumer demand at each take-up review point as defined by the contract.  For Additional Services Revenues, it is likely that there is a significant untapped level of recoverable funding waiting to be identified. These should be reviewed at the end of each financial year,  but can also be reviewed retrospectively, but this requires skilled and knowledgeable resource to  both find and optimise any returns.

How much funding could be owed to the public purse?

For example, in Phase 1 of the Superfast Broadband programme, BT forecast 20% take-up by customers across its network infrastructure. At H2 2019 BDUK report  that take-up is running at over 62%. And network providers are now working on an assumption of over 70% take up.

In its annual results announced in May 2020, BT showed an allocation of £788m ‘gainshare’ (overage)  forecast. When combining efficiency savings, increasing take-up levels and additional service revenues there could be over £1bn owed to local bodies which could be returned to the public purse and reinvested to improve broadband/full fibre coverage.

It is recognised that there could be funds returnable to individual local bodies of between £15m - £35m depending on the size of the Superfast contracts.

Audit the deployment against your contracts to ensure that full clawback has been achieved.

We believe that with the right team supporting the local bodies a significant value of funds can be evidenced and returned to the public sector for further investment in broadband or for other essential services .

Working together to create and deliver digital infrastructure in the UK.

Working together, we provide commercial, technical, financial, procurement and legal services that wrap every element of the project life-cycle from strategy creation through to the end of the contract term and beyond.