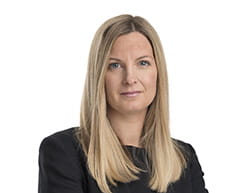 Charisse specialises in private wealth disputes and contentious asset protection issues including trust disputes, removal of trustees, removal of executors, financial abuse claims and Court of Protection work, contentious deputyship and attorney issues, claims between unmarried partners and the preparation of cohabitation agreements, claims against estates including will validity claims, the doctrine of proprietary estoppel, claims under the inheritance (provision for family and dependants) act 1975 and other estate issues including claims under the forfeiture act as well as dealing with contentious estates out of jurisdiction assets.

As part of her new role, Charisse will also work closely with Helen Briant and the Private Wealth team in Birmingham.

Charisse has featured regularly in both Chambers and Legal 500 in recent years and has been noted as being a "formidable litigator who works incredibly hard and is unbelievably thorough". In 2020, she was also named as Lawyer of the Week in The Times.

"We are really pleased that Charisse has joined our Commercial Litigation team in Exeter. She brings a vast wealth of knowledge and experience to the team and will play a key role in our growth and development."

"I'm excited to be joining the partnership at Trowers and stepping into this varied role working with both the Commercial Litigation team in Exeter and the Private Wealth team in Birmingham. Both teams are on a considerable growth trajectory and I look forward to helping them build on this further."