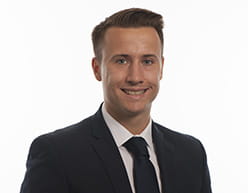 Dylan is a Trainee Solicitor with us at Trowers & Hamlins. Currently sitting in his third seat in our Construction department.

In his first seat, Dylan was involved in a wide variety of matters, where his work included preparing reports on title, assisting with exchange and completion and dealing with post completion. In this seat he interacted with a range of clients, including local councils, housing associations and property development companies.

His second seat was in the Commercial Litigation department. The work he undertook involved preparing court bundles and documents as well as interacting with counsel. In addition, he often carried out detailed legal research tasks. He feels he has learned a lot from the highly experienced team, and has enjoyed the variety of the department's practice.

Dylan is also a CSR committee trainee rep, which has included organising the firm-wide food drives for the firm's nominated charities.

Why it might be time to consider green finance