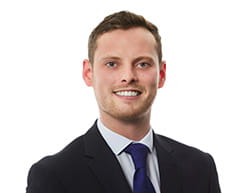 Julian is a solicitor in the Real Estate department at Trowers and is the Chair of Trowers' LGBTQ+ and Allies network. Julian advises public and third sector housing clients with regards to public procurement, vires, State aid, regeneration, governance, partnerships, commercialisation, commercial contracts and charity law.

Julian has advised on numerous regeneration schemes on all aspects of public and third sector housing issues, including acting as lead associate on Westminster City Council's flagship Ebury Bridge regeneration scheme. Julian advised on the public procurement process for the major D&B contractor as well as state aid, vires, local authority finance, governance and housing issues across the project.

Julian specialises in State aid law, advising a wide range of public and private sector bodies at a local and national level. Julian has advised, provided training and written in national publications on all aspects of State aid. Julian has advised West Midlands 5G (the Combined Authority-owned company delivering the largest 5G testbed in the UK), the Department for Education, Homes England, the Greater London Authority and Westminster City Council on state aid issues.

Julian advises clients on charity law including in respect of charity applications and governance including for Stonewall Housing and the E. Hayes Dashwood Foundation.

As Chair of the LGBTQ+ and Allies Network at Trowers Julian champions diversity and inclusion initiatives by organising awareness campaigns, fundraising events and driving cross-network activity.