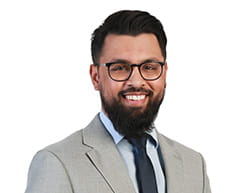 Jubad is a solicitor in Trowers & Hamlins' Real Estate department based in Birmingham.

Jubad also has experience in negotiating and drafting new leases, lease renewals, assignment of leases, surrender and re-grant and licences. He is familiar with the due diligence process, title investigations and enquiries of the seller. Jubad has experience in drafting and negotiating commercial contracts for sale and purchase, investment acquisitions and assisting partners with plot sales and purchases.