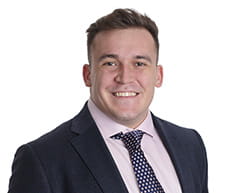 Benjamin is a current Third seat trainee within Trowers sitting in International Construction in Abu Dhabi.

Benjamin's first seat was in the Real Estate Investment & Development team where he worked in social housing and commercial property acting for a variety of clients including Homes England, various local authorities and affordable housing entities.

During Benjamin's second seat, he sat in the Employment and Pensions team where he advised on various employee relations matters including disciplinary and grievance issues, sickness absence, capability issues, restructures and redundancies and employment contracts. Benjamin was also heavily involved in Claimant work, securing positive results on a regular basis.

Benjamin is currently in his third seat in International Construction and working from our Abu Dhabi office.
Benjamin assists on a broad range of projects throughout the Middle East and beyond. The teams work spans a wide range of industries and sectors including power, renewables, water, petrochemicals, industrial, transport, social infrastructure and real estate development. Benjamin also assists with litigious matters within the team on a regular basis.