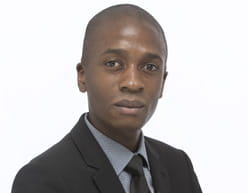 Tinashe is a Senior Paralegal in the Real Estate: Security Finance team of the Trowers & Hamlins Housing and Regeneration Department. Tinashe joined the department in 2014.

Before joining the department, Tinashe was a paralegal in the Sales and Home Ownership of the Trowers & Hamlins Housing and Regeneration Department. Tinashe's responsibilities involved assisting the team leader with pre and post completion enquiries and formalities, taking client instructions, drafting basic Right to Buy, Right to Acquire, Preserved Right to Buy transfers and leases.

Tinashe prepares applications to the Land Registry and the Financial Conduct Authority, assists in the preparation of Certificates of Title, conducts due diligence on large portfolios of properties which includes examining searches, reviewing titles and reviewing leases. Tinashe also obtains indemnity insurance policies and assists with post-completion formalities.