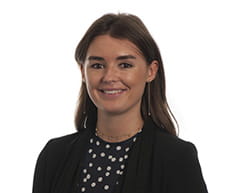 Sophia commenced her training contract with the firm in September 2018 after working as a paralegal for two years in the Banking & Finance department; she is currently in her third seat in Trowers & Hamlins' Real Estate department.

Sophia's first seat was in the Abu Dhabi office, in the International Corporate department. During this seat she was involved with a variety of work, including assisting and advising government bodies on large scale energy projects throughout the Middle East, reviewing and negotiating commercial contracts, typically in relation to IT/software goods and services and general corporate governance work.

Sophia's second seat was in Banking & Finance, in London. Sophia advised on loan arrangements for the purposes of refinancing, acquiring and developing real estate with a particular borrower focus. She has also assisted on: an acquisition finance transaction for a healthcare company, a number of margin loans for an overseas borrower, loan agreements (both syndicated and bilateral) for Middle Eastern lenders, various housing finance transactions from both a borrower and lender perspective and has completed several commodity trades for clients obtaining advice in relation to Islamic Finance.

Trowers & Hamlins advises London Borough of Enfield on Meridian One