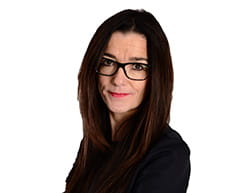 Amanda Hanmore, partner at top 40 law firm Trowers & Hamlins, has been listed in The Lawyer's Hot 100 list 2019. Amanda is head of the firm's Birmingham real estate team and since joining in 2015, she has significantly grown and developed the firm's offering, which now includes four partners specialising in regeneration, investment and strategic housing and public sector regeneration.

The Lawyer’s Hot 100, in association with LexisNexis and Alix Partners, gathers together the standout lawyers in the UK over the past year – the most daring, innovative and creative lawyers from in-house, private practice and the Bar. Amanda is one of two lawyers who made it on to the list from the West Midlands.

The Lawyer states that:

"Whatever the year, everyone who is named in the Hot 100 has one thing in common: they are the lawyers of the moment. All those on the 2019 list are shaping the legal profession right now; though many already have a distinguished career behind them, no one is included because of past glories."

Amanda was also recognised for having 'led on a regeneration project that is set to change the face of Truro, which will provide 1,500 new homes, as well as education facilities and retail space.'

Amanda commented on her Hot 100 status:

"I am delighted to have been included in The Lawyer's Hot 100 2019. It is extremely rewarding, not only for me, to be recognised amongst so many talented peers across the legal industry, but also for our real estate team in Birmingham. Particularly poignant is the fact that this recognition embraces the exciting regeneration projects and real estate developments happening across the West Midlands region, something which I am extremely passionate about. Congratulations to all included in the Hot 100 this year."

The Lawyer reported that they received hundreds of nominations from across the legal profession, making this year's final selection one of the most competitive ever. In 2018 the inclusion of 51 women marked the first time the men have been outnumbered in the Hot 100; this year the pendulum has swung even further and there are 59 women on the list.

PropTech in the Middle East: ready and willing